Information about past games.
Locked
3 posts • Page 1 of 1 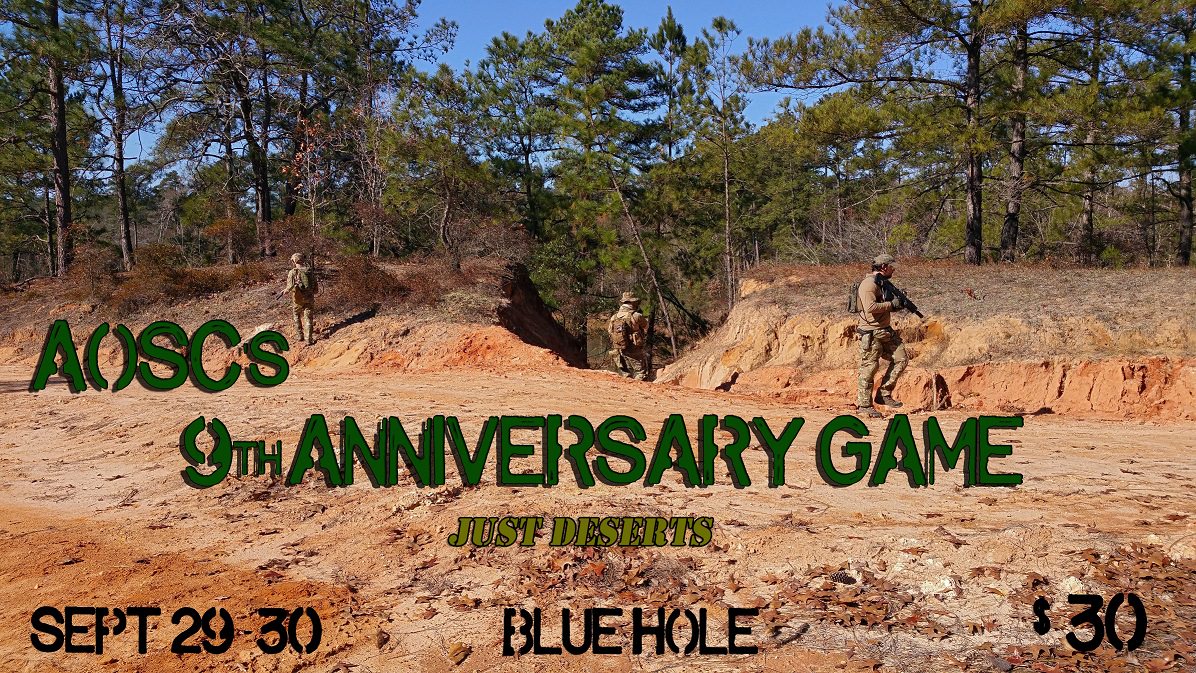 Scenario:
In previous years...
2014: After much controversy surrounding the 2000 election, the supreme court has decided to recount all the votes. A final result revealed Al Gore was in fact elected president. Based upon new legislation, he is inaugurated in 2017 as the incumbent. In his first act as President, Gore decides to issue a ban on all firearms. Throughout the United States, numerous rebel factions have risen up to respond to the trampling of their rights. Anarchy runs rampant. Amidst the chaos, two forces grow within South Carolina. The Alpha Federation and the Bravo Coalition square off, both vying for control.
2015: Both factions have been licking their wounds since the showdown of epic proportions last September. Neither side was able to capture the other's dignitary, leaving both without an edge during the negotiations. Any hope of peace talks had long since faded as tensions rose. This left the battlefield nothing but a bloody mess after immense casualties on both sides... and no resolution to the conflict in sight. Each faction has again mustered their full strength to take on the other, with the intent to finally establish dominance over the state. Will you choose to aid the Alpha Federation, or the Bravo Coalition in their struggle for supremacy over South Carolina?
2016: 2016 saw the Bravo Coalition make large territorial gains at the expense of the Alpha Federation. Despite the casualties sustained, the Alpha Federation intends to exact revenge on the Bravo Coalition's forces by launching an all out attack. If last year was any indication, they'll need all the help they can get. The Bravo Coalition braces for the impending battle, with the intention of repeating last year's victory. Which side will you aide?
2017 It's been years since the conflict started. Both sides have lost numbers. The lower ranks are losing heart. The civil war rages on with no apparent end in sight. Neighbor vs neighbor, brother vs brother. The internal struggle for dominance continues in SC, with the Alpha Federation battling it out against the Bravo Coalition. The numbers are thinning. Who will you side with?

Present day...
2018 After several years of civil war in what is left of South Carolina, the Alpha Federation has chosen to take a new tact. Moving away from the urban areas where the Bravo Coalition has usually fared better, they are now attempting to hit them where it hurts; their water supply. With infrastructure and utilities breaking down since the nation fell apart from civil war, limited reservoirs of fresh water have sustained much of the war effort of the Bravo Coalition. After some successes in urban areas for the BC, they have stretched their supply lines thin. The Alpha Federation plans to capitalize on this by targeting the Bravo Coalition's largest reservoir of fresh water: the 'Blue Hole'. Unfortunately for the AF, the BC got wind of this scheme and is moving elements to protect these major assets. The two water bodies (northern and southern reservoirs) in the AO will be being guarded by the Bravo Coalition. The Alpha Federation will be attacking from the eastern woodline, while the Bravo Coalition attempts to guard the main road from the western side of the AO.

-Every 1.5 hours, two separate locations will provide one vial each of two different chemical ingredients. Alpha must collect these two separate chemical ingredients from these two separate locations and bring them both to the chemical weapons facility (a third and separate location from the first two) in order to combine them. Once combined at said facility, they will become a dangerous chemical agent intended for widespread aqueous dispersion. Alpha must then bring this chemical agent to one of the two reservoirs and pour it in (after calling an admin on channel 1 to come observe). Pouring the chemical agent into the larger reservoir is worth 75 points, and the smaller reservoir is worth 50 points. Pouring the unmixed ingredients into a reservoir is worth nothing. This is the primary mission set and can be completed as many times as possible (again, a new batch of ingredients will be released every 1.5 hours). The two separate locations from which the ingredients are released will not change. The chemical weapons facility location can be overrun by the enemy. If this happens, a new mission set for establishing a new chemical weapons facility will be provided and must be completed in order to continue the primary mission set (poisoning the reservoirs). If you need specific instruction (you will) and you want your scores to be counted (you do) then you will need to call an admin on channel 1 as necessary.
-Other (secondary) missions worth less or more points will be issued and will have various parameters to be specified then
-HQ will be somewhere in the wood line to the east
-There will be some capturable respawns as well
-Anyone carrying an objective/prop (like the chemical agents, etc.) that is hit must then place that objective/prop on the ground next to where they died as soon as they have bled out (since bled out players cannot move objectives of course) and may NOT hide it. Players trying to find objectives may ask hit players for them before they have bled out, and those hit players must immediately comply and hand over the objective(s) they have on them.

-Prevent the Alpha Federation from poisoning both reservoirs. To do so, you may intercept the ingredients and "destroy" them (by calling an admin on channel 1), or by taking over the chemical weapons facility (you will start the game not knowing where it is and must find out by observing enemy movements or intercepting enemy combatants with ingredients), or by intercepting the chemical agent after it has been combined (call an admin on channel 1) and then rendering it inert at a location and via a process to be specified by the admin. You will receive 25 points for each ingredient you intercept and dispose of (by calling an admin on channel 1) and 75 points for each chemical agent you intercept and render inert (by calling an admin on channel 1)
-Other (secondary) missions worth less or more points will be issued and will have various parameters to be specified then
-HQ will be to the west, somewhere between the two reservoirs
-There will be some capturable respawns as well
-Anyone carrying an objective/prop (like the chemical agents, etc.) that is hit must then place that objective/prop on the ground next to where they died as soon as they have bled out (since bled out players cannot move objectives of course) and may NOT hide it. Players trying to find objectives may ask hit players for them before they have bled out, and those hit players must immediately comply and hand over the objective(s) they have on them.

Rules:
-To medic a dead player, make physical contact with the hit player for 30 seconds. After their third hit, the player bleeds out and returns to spawn. Mandatory 3 minute bleedouts always apply. Only friendlies may medic, and only one player may medic another at a time.
-Bravo has odd channels, Alpha has even (as always, no going on enemy channels)
-Channel 1 is for admin, call on channel 1 if you have any problems or questions at any time
-Deadrags are required. Glowsticks are required as deadrags for the night game.
-Standard AOSC rules that apply: http://scairsoft.com/rules
-Bring a radio or you won't know what is going on
-Dress for one faction or the other per the rules, you mix faction camo, you don't play (Black with green/tan is NOT OK, etc.)
-Stay hydrated!
-SC Airsoft Supply will be vending with most everything you need on site
-If you show up after we have begun play, call on channel 1. It is NOT OK for you to take the field without having registered and chronographed first.
-Campfires are allowed with constant adult supervision.
-Anyone wishing to operate in-game vehicles should contact Mr. Marauder (Jacob West)or Dominum (Henry Williams).

Night Game Rules (In effect at 1900 hours [after dinner break])
-EVERYTHING on the field will be SEMI-AUTO ONLY during the night portion of play EXCEPT anything that has a 0 MED (under 300 FPS w/.25gs) AND is firing glowing tracer rounds.
-A colored glow stick (chemical or electric) is required to participate (it will be your dead rag)
-A flashlight of some kind is required (in case you or someone near you needs to be able to see in an emergency situation)
-Flashlights ARE NOT glow sticks and v.v.

Waiver:
If you are UNDER 18 years of age and will not have a parent or legal guardian with you at registration to sign, have them sign one now and bring it with you: Waiver found here "Searching for my goats since 2009"
"All you have done here is take the typical leftist line and regurgitate it in a barely palatable,
quasi poetic, pseudo intellectual format. Quite frankly, that makes you a moron."

Primary objectives have been updated.

Return to “Past Game Info”